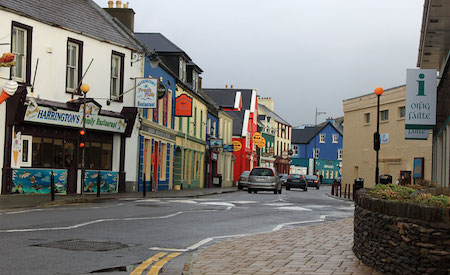 Best Fish and Chips Ever!

After Dublin, we set out to the very south-west tip of Ireland, a little tiny fishing village called Dingle.

I’d never heard of it before, but a few friends who had done some travelling in the past recommended it. We stumbled upon a livingsocial coupon for a fish and chips pub in Dingle, so we figured that the stars were aligning and we needed to visit this small Irish village. I love local restaurants having discounts, it keeps people from just going to the same big chains that they always do at home.

And boy oh boy, was I not disappointed.

First off, there’s no train that takes you directly to Dingle. You have to take two trains out to Killarney, and then a bus will take you to Dingle. We passed hundreds of sheep farms on the way. The sheep all had bright pink and blue spray paint on them, which as it turns out sheep farmers use to keep track of their sheep (I found that out later when I looked it up).

Once you arrive in Dingle, it feels like you stepped back in time. There are very few cars around town. Dogs walk without leashes, and lots of stores will have no one in them (presumably they went for lunch and didn’t lock up?).

And the most unique part of Dingle? People still speak Irish. It’s one of only four places in Ireland where they still speak the native dialect. Of course everyone there knows English as well, but it did clear up my inability to eavesdrop on the locals!

It’s a fishing village, and it shows. For dinner we went to Murphy’s Pub, a small eatery on the main strip. We were told to order the fish and chips, and we were incredibly hungry, so we didn’t argue one bit.


It was delicious. Like, one of those once-in-a-lifetime tastes that you’ll never be able to fully replicate ever again. Which makes it all the more precious. The fish was incredibly fresh, fresher than I think I’ve ever tasted before. Canada has these rules about fisheries needing to freeze fish before you can sell the fish, and I think Ireland has more relaxed regulations (everything in Ireland is a little more relaxed). The beer batter wasn’t full of bread, it was a thin layer, slightly beer-tasting, and it added to the flavor without overpowering it with batter.

It was succulent. I wish I could bottle and sell what I tasted that day. But I can’t.

What I find sad is that I will likely never taste that fish again. When I think about how many trains and buses it took to get out there, I don’t know if I have the patience to make a trip like that again. There were no seaplanes in the Dingle harbour, which means that there’s no shortcuts to be had.

If you ever have the chance to go out to Dingle, please take it. I’d tell you to smuggle some fish and chips out for me, but I know it wouldn’t work. I’ll still ask though…